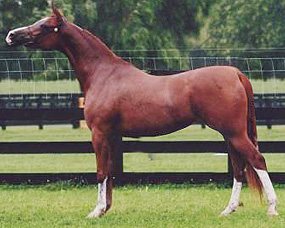 Miracle is the second to last daughter of the beautiful Summer love. A half sister to Mozambique, we could not resist the offer to purchase her from her owner Norman Ironside.

Summer love is probably the most beautiful mare sired by Simeon Sanegor out of Simeon Shirah bred by Glen North Formerly of Simeon Stud.

Miracle is a Grand Daughter of the Outstanding sire Simeon Sanegor and she has 2 crosses to him, one of each side of her pedigree. Miracle also has 3 crosses to one of the greatest mares Simeon bred “Simeon Shirli”. Miracle has achieved the highest honour in the show ring in Nz. And managed to do it as a broodmare, she is now retired from the show ring to continue her broodmare duties.