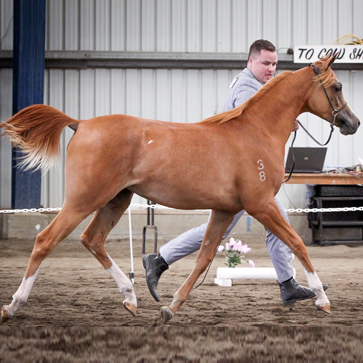 “Pumpkin” as she is known at home is a sensitive and extremely beautiful young filly. She loves attention and is the image of her Dam. Pumpkin is sired by Zeus Ns, A son of Ajman Moniscone and the only son of his in NZ.

Zeus has already produced some NZ National Champions since his arrival.
Pumpkins Dam is Miracle of Love (Aus) a multi Supreme Champion Halter mare and an incredible producing mare. Herself being a NZ & Australian National Champion.

All her daughters shown in OZ & Nz have been Champions as well,
Pumpkin is a maternal sibling to Kelaray Goddess of Love, a Multi Supreme Champion mare who we sent to Australia to compete. She was East Coast Reserve Champion and Multiple times Australian Top 5. She was later sold by us and Exported to Sweden.

We have currently retained Miracles last daughter ( Kelaray Zena) as a future broodmare for our stud. Who is a Full Sibling to Kelaray Aphrodite.
Pumpkin has been extensively handled, and is the Current North Island Champion Reserve Junior Filly ( Against 2 & 3 yr olds).

She is a very sensitive young filly so does require a bit of reassurance.
Pumpkin loves attention, and is a super show off.

She is beautifully put together and will be a remarkable show horse and saddle horse / Future broodmare.

We expect Pumpkin to mature around 15.hh

Her first Trip away from Kaitaia to Taranaki she travelled like a dream ( with Company). On the way home she travelled by herself and was not fazed at all by the long trip. She doesn’t stress at shows , is happy to eat and drink etc.